These are bumper wing replacements for OEM bumpers on the Toyota FJ Cruiser that either get their wings knocked off or owners who decide they are more aesthetically pleasing. It’s a reasonably cheap replacement till you can afford a real bumper. I’ve been selling them since late 2007.

They are aluminum diamond plate, bolted on with stainless bolts. Easier to apply than stick-ons, and completely reversible when you are ready to go back to stock for resale.

The fit is a bit large in the front to cover the slots for the original end caps, but IMHO they look pretty good as long as you don’t get overly critical. 😉 The scratches on my bumper that you see in the pictures are a result of getting the template right, sliding back and forth, etc.

I tried rattle cans with a couple of different products (Rustoleum, Krylon), but wasn’t satisfied with the results. So I did a bit of research. Looks like the best prep available is Alodine. The pages I used to link to appear to be gone, but if you don’t prep the aluminum with Alodine or something like it the paint won’t set well and will easily rub off. The powder coat is rock hard and looks great.

Powder coat is definitely better than paint for this application. If you were doing skids or rock rails I would say paint is better, because the rocks will scrape off anything and it is much easier to rattle can for touch ups than to re-powder. If you hit rocks hard enough to scrape off the powder on the wing replacements you’ll have much bigger issues to deal with than the plates.

Here’s some pictures to see what they look like. 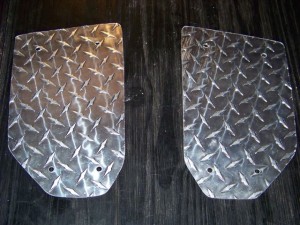 This is an unfinished set. The aluminum usually has some scratches when I get it, probably due to handling in transit. 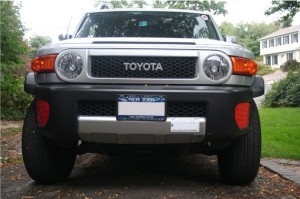 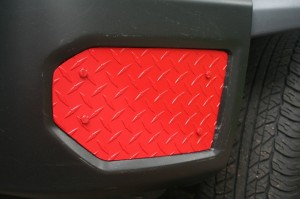 More pictures are available in the gallery.